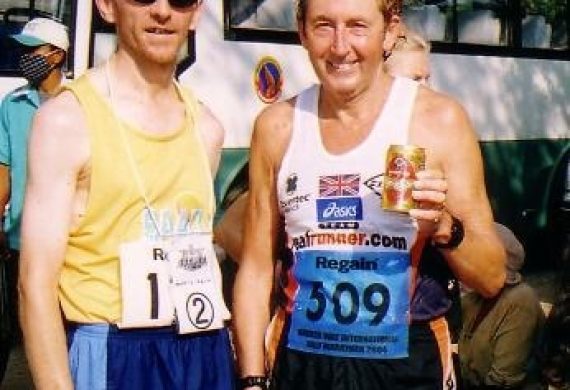 From Vietnam to Accrington – In Tribute to Ron Hill

From Vietnam to Accrington: Inspired runner takes on the Ron Hill Accrington 10K

Inspiring runners from all corners of the earth to ‘run every day’, Ron Hill’s influence has stretched beyond his hometown of Accrington.

Stuart McLay, currently living and teaching in Vietnam, has spent his life in awe of Ron’s talent and whilst travelling to his hometown of Middlesbrough, will be taking part in the Ron Hill Accrington 10k – that’s the equivalent of (almost!) 926 10K races from Hanoi, Vietnam to Accrington!

Growing up, Stuart followed Ron’s running journey, watching him compete at the Commonwealth and Olympic Games. Amazed by his training ethic, Stuart decided to take up running seriously himself.

Heavily interested in sport, running was a way for him to keep fit, but as time went by, running became the forefront of Stuart’s life.

Learning a lot about sports science, Stuart began to take tips from Ron’s extensive knowledge. During this time, he learnt key information on nutrition, clothing, and biology.

As an international educator, Stuart has worked in various countries all over the world, inspiring young people and ultimately changing their lives. Almost twenty years ago whilst living in Thailand, a country with little running culture at the time, he found himself searching for races and he found one in Cambodia and it was here that Stuart was able to meet Ron at the Angkor Wat Half Marathon and 10k, during which he raised funds for landmine victims. Plucking up the courage to speak to Ron, he shared his admiration and exotic race plans.

In his line of work Stuart now encourages communities to commit to exercise and raise money for Vietnamese charities. Twinned with the ideals of The Running Bee Foundation, Stuart believes in the importance of health and fitness, especially for young people.

Celebrating the life and legacy of running legend Ron Hill, Stuart is beyond excited to be taking part in the Ron Hill Accrington 10k.

‘’Ron is a true inspiration to me and many others. I have been inspired by his talent; reading his books and following his journey has been a pleasure over the years. A friend of mine sent me the info for the Ron Hill Accrington 10K and as I was visiting the UK, it was a no-brainer that I had to take part and run in honour of the incredible man he was.’’

Stuart is as passionate about exercise and health in his personal life as he is in his professional life and understands the importance of exercise for your health.

‘’Exercise has always been an important element in my life and I would encourage anyone to put on a pair of running shoes. Running has given balance to my life. You don’t have to exercise every day or go to the extreme of running a marathon but getting out and doing the best you can will have a hugely positive impact on your health and mental wellbeing. It might be a struggle to get out of the door, but you never feel bad after you have done it!’’