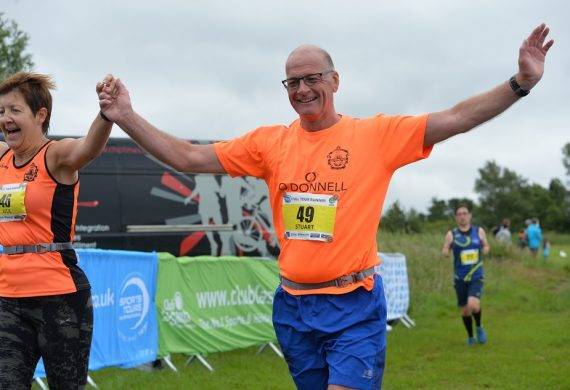 Is Blue Monday a real thing? Or is it a load of rubbish? Whatever your opinion, running can help lift your mood!…

If you’re still trying to run off those few extra Christmas calories, keep it up and you’ll be in perfect shape for our recently-announced race, the Knowsley 10k!

But if you’ve let your running plans slip and are feeling “down in the dumps” this January. Don’t worry, you’re not alone.

In fact, there’s even a name for it – “Blue Monday”, said to be “the most depressing day of the year” falls on the third Monday of each January.

Supposedly a result of financial, emotional and work pressures of the New Year, “Blue Monday” was given its name in a press release way back in 2005, and become more and more well-known each year since.

It’s not a confirmed science, but that doesn’t stop it making its way back!

So if you aren’t feeling 100% this January, and you’re worried the mythical “Blue Monday” curse might be real, here’s a few reasons why running should be your go-to source of inspiration:

Some of us feel particularly down this time of year because we’ve failed to keep up with our fitness commitments over the New Year period.

But many of us feel bad simply because we have no fitness commitments whatsoever and don’t have the confidence or enthusiasm to make the first move.

Well, MyFirst Mile is looking to change all that.

A new initiative from The Running Bee Foundation, MyFirst Mile aims to encourage individuals and communities to complete their very first mile of exercise.

Whether its walking, jogging or running, it doesn’t matter. The point is to help people on the way to taking their first steps into living happier, healthier, more active lives.

So if you want to stop feeling totally powerless over your own future this Blue Monday, consider taking part and changing your life for the better!

Which is why entering a Running Event could be the way to go!

If you know you need to get back into shape, or at the very least need to get your running shoes back on, entering yourself for a running event will not only give you something to look forward to but will also give you motivation to get yourself and your stamina ready in time for race day.

Much has been made of the link between exercise and mental health over recent years, and for good reason.

With scientific evidence firmly in the corner of the affirmative, it’s undeniable at this point to assume the two aren’t directly linked.

Running, being one of the most readily-available and accessible forms of exercise, is an obvious choice for someone looking to use exercise to lift their mood.

It’s no cure, but it could have a huge positive effect on your mental health.

Want to find out more about the running events we host throughout the year? Hit this link to see our Events page.