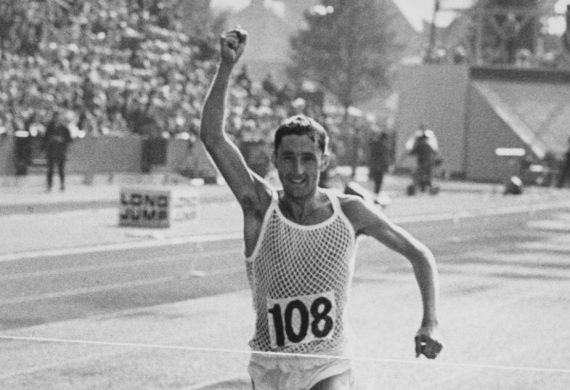 Our ambassador, Our Friend and Our Inspiration – Dr Ron Hill MBE

They say to truly understand someone, you should first walk a mile in their shoes. But for some people, a mile is not nearly enough. Especially for someone who covered as many miles in their lifetime as did Dr Ron Hill.

In a lifetime marked by worlds bests and incredible achievements, ‘Dr Ron’ completed a staggering 115 marathons (with 112 of them coming in under 2hrs 50). He clocked the second-fastest marathon in history at 2:09:28, in a performance that won him gold at the Edinburgh Commonwealth Games. He was also a World Record breaker, on the track, at 10 miles, 15 miles, and 25 kilometres and on the road over the 20-mile distance.

In 1969 Hill won the European Championships over marathon distance, on an iconic course between Marathon and Athens.

Later, in 1970, Hill became the first Brit to win at the iconic Boston Marathon. Despite terrible, cold and wet conditions, with fierce headwinds, he was able to claim victory in an incredible 2:10:30, taking, in the process, more than 3 minutes off the official course record. Hill said of his achievements in Boston,

“I had no idea of my pace, because I didn’t understand the odd splits that Boston used in those days. So, I was shocked when I heard the finish time, and absolutely elated—the first Briton to win Boston.”

Hill is perhaps most well known as the original run ‘streaker’. Starting in December 1964 and lasting an astonishing 52 years and 39 days, Ron embarked on what is to this day, the longest ever run streak. Even after a car accident, in 1993, in which Hill broke his sternum, did not stop him. He had already run on the day and was able to complete a mile the following day, on the track. By the age of 70, Hill had accomplished the ambition of racing in over 100 countries. Including running events in Panama and the Faroe Islands.

Later, Ron completed a PhD in textile chemistry at the University of Manchester. He went on to become a pioneer in technical sports fabrics and running clothing, including wrap-over shorts, mesh vests, waterproof running jackets and reflective strips. He was the founder of Ron Hill Sports, and later Hilly Clothing, who also specialise in technical running apparel.

Ron’s lifelong commitment to the running community of the North West never wavered. Founded in 1981, Hill founded the legendary Tour of Tameside, often touted as one of Britain’s toughest and most iconic running events. He was a community ambassador for Sports Tours International, and later The Running Bee Foundation. He could often be seen at Foundation events, and always had time to meet and chat to fans and support anyone who shared his love of running.

Over my time with Sports Tours and the Foundation I got to know Ron and his wife May pretty well. A lovely couple, very unassuming and humble – almost like a set of new grandparents for me. Their home shows exactly his achievements, with trophies, pictures, vests, kits, race memorabilia and much more. It tells the tale of his travels and running over the past 50+ years. I remember Ron fondly reminiscing about ‘how races used to be’ and when winning abroad he often would receive a wreath and a pot of stew – rather than a big cheque. Even the time he lost his running shoes before the start of a race – he simply taped up his feet, ran, and won!

At our UK events, I would always meet Ron and May and walk them to the start line so they could help with starting the race and to be part of the presentation ceremony post-race. When walking them to the start line, the amount of people who you could hear whispering “that’s Ron Hill!” was amazing. Even in his later years, he cut an iconic figure. Ron even ran in a number of our events; I guess for keen runners that’s like having a kick around with Becks!

Ron always had time for everyone, I don’t think he ever said to his well-wishers, “sorry I don’t have time for a picture”.

Ron will be sorely missed, but his impact and legacy will live on through the work that The Running Bee Foundation is committed to, and I know Ron would be saying “just get out and run”.

Our friend, and endless source of inspiration, Ron will be missed dearly by everyone at The Running Bee Foundation & Sports Tours International. Our thoughts remain with Ron’s wife May and his family at this difficult time.