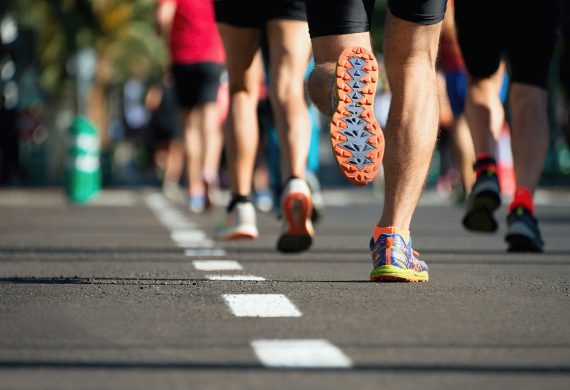 On the 19th March 2020, gyms around the country officially closed their doors and continued to stay shut until the end of July. As a result many of us took to ways of keeping fit outside, the most popular of these activities was running. Google trends shows that people searching for “couch to 5k” increased dramatically during this time, but along with that so did searches for “shin splints”! This clearly suggests that more people were getting into running, but that more people were also getting injured.

So the question is how can we reduce the risk of running injuries?

With shops being closed – there was a slight problem in obtaining running trainers for those who didn’t have any. As a result people turned to the internet or worse dug out an old pair of trainers from years previous. As simple as it sounds, when it comes to selecting the correct trainer, it is hugely important to be able to try them on first; perceived comfort in footwear is a massive factor in injury prevention. Following on from this, there is then the minefield of whether you choose between a “neutral” or “stability” trainer. Throw into the mix whether you go for a “barefoot” shoe, a maximal cushioned shoe or even if you decide to go all out and get a trainer with a carbon plate in the mid sole, in search of that quicker time. If you are unsure it is always best to seek advice.

Have a good training plan:

It is really important to increase the amount you are doing very gradually. This applies to runners of all levels. Here at Harris & Ross, we see just as many regular runners who have increased mileage too quickly, as people who have just started. During lockdown especially, many people who have run previously, tried to go straight back to what they were running. This is usually a mistake as they have become deconditioned from doing so.

You have got all the gear and settled on a sensible training plan, so what else can you do to prevent injuries?

Often neglected by runners who are concerned of any ‘bulking up’; resistance training is a great way to ward off any potential injuries. There can be an assumption that we will just get strong by going out and running. Whilst not untrue, we can better target individual muscle groups and work on any deficits we may have. We often hear about people talking about glutes; for the majority of us, these big muscles aren’t very active 9-5 when sitting behind a desk. To then expect them to run 10k after work can be a bit of a shock to the system. Keeping them strong and activated is a sensible plan.

Everyone has different biomechanics; it would be boring if we were all the same. People are still searching for the perfect biomechanics, but in truth we don’t know what that is. That being said there are certain factors we look for which may be more predictive of certain injuries. Screening for these factors, or identifying them if an injury is present, is important in the quest for a healthy runner. We can assist in different ways including (but not limited to) an individual strength program, an Orthotic prescription and Gait re-training.

Lots of people have been googling it, so what actually is “Shin Splints”?

When referring to shin splints, most of the time the underlying condition is actually something called Medial Tibial Stress Syndrome. Pain tends to be in the lower 1/3 of the leg and towards the inside. Pain is often present where some of the deep calf muscles attach along the tibia bone. Sometimes we also get tenderness along the bone itself and a bruised sensation. Common reasons for this include an increase in running quantity, a change in running surface, calf strength, lower limb mechanics and running style. If you are suffering please get in touch to see how we can help.