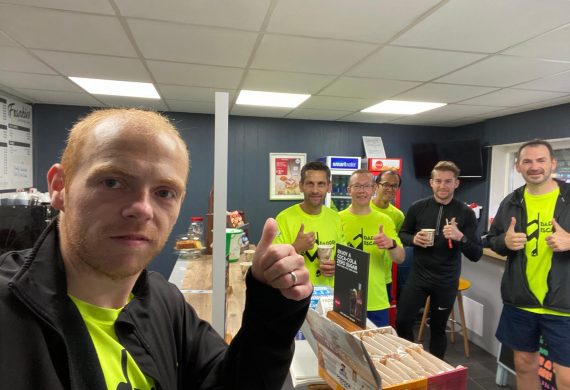 Running isn’t just a popular sport of a great pastime; It also has the power to change lives for the better in a number of ways. One group of people that know this all too well, and decided to do something about it, are Daddies Escape.

We recently sat down with the running group to discuss what running means to them, their community, and their recent #72for72 challenge which has attracted quite a lot of attention in the running world, and rightly so…

Tell us about the #72for72 challenge?

“The challenge is to complete 72 separate 10km runs in the month of July. If you know your days of the month you know that there are 31 days in July, and if you know your maths you know that 72 does not divide into 31. The challenge of running 72 separate 10km runs means that for 21 days in the month you need to go out twice a day but for the other 10 remaining days you need to go 3 times and run 10k each time.

There are 2 of us doing this on an individual basis and then a group of the guys from Daddies Escape running in a relay team and competing a set number of the 10k’s each to make up the 72.

By the time the challenge has finished the distance total will be 720km each, which is 447 miles and to put it into some context that’s the equivalent of 17 and a bit marathons in 31 days and is the same straight line distance from Manchester to Luxembourg City.”

What are the reasons for creating this challenge?

“The challenge was created when one of our running group members spoke to the Royal Manchester Children’s Hospital Charity. The NHS was turning 72 this year and they were trying to motivate fundraising efforts with a 72 theme. There were a few ideas flying about but we wanted something to really challenge and test us and grab people’s attention. Everyone knows we can run as this is our hobby but running this amount in the time is something none of us have done so the idea of 72 10k’s stuck.”

You’re almost finished now! How are you all staying motivated to complete the 72 runs?

“The motivation comes from seeing the Just Giving page donations rising steadily through the month, as people continue to donate it keeps us spurred on to get to the end. We have a WhatsApp group and there are lots of positive messages of support from the other guys on there which helps a lot too. My wife has been very accommodating and one of my daughter’s came along and ran a mile with me too and that was just magic for me.”

How much money have you raised so far and how much do you hope to raise?

“We have just hit the £1000 mark on the 28th July. Our original target was £720 to try and keep with the theme but when we passed this we said 4 figures would be nice. We are hoping for more as any extra can really make a difference to the 2 charities we are supporting.”

Daddies Escape are Running Bee regulars, tell us a little bit more about your running group?

“The group was formed in October 2016 and was born out of seeing the same faces at different running events. As a few us got talking and realized we were from the same local area we decided to start our own running group together so we can run together and keep each other motivated whatever our initial reason for running was.

Over the years we have grown in numbers and welcome not just dads into the group, we have ladies and younger members too, we are inclusive. We have runners who regularly compete for prizes at events and some who run for fun. We don’t take ourselves too seriously and are always on hand to help out at any event where we can as course set up, registration, marshalls and pacers.”

What does the Running Bee Foundation mean to you and your local community?

“The Running Bee is a great charity for giving back to the local community. The idea is to tackle childhood obesity and help local communities become more active. I started running in the first place to help lose weight so I know how much of a difference an active lifestyle can have. If we as a group can raise money to help in the fight against something I have been through myself then we will do what we can.”

If you’d like to find out more about Daddies Escape and their incredible fundraising efforts, check out their official Just Giving page here.

We’ll keep you up to date with any news we get from Daddies Escape!