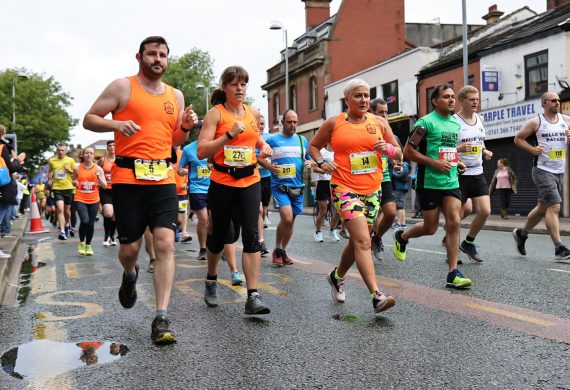 Another great run for the Tour of Tameside!

The Tour of Tameside returned (29th July – 1st August) in all its glory for its commemorative 40th anniversary. Founded by Dr Ron Hill in 1981, it was re-introduced back in 2015 and has been a North West favourite ever since!

The Tour kicked off with over 450 runners on Thursday (29th June) at the X-Trail 10K in Daisy Nook and Park Bridge Country Parks. Taking first position for the men’s race was David Barratt from Salford Harriers & AC (35:07). Barratt was closely followed by the first place female winner Martha Tibbot from Saddleworth Runners club (40:31).

Friday evening saw stage two and the iconic ‘Hell on the Fell’ 6 mile run starting in Copley. With only a second in between the top two male runners, Barratt took second position with Sale Harriers Manchester Gavin Hill taking first place, completing the route in 36:30. East Cheshire Harrier’s runner Hayley Simpson came on top for the females with a time of 46:39.

In the third stage of the route runners tackled the ‘Hero Half Marathon’. David Barrett regained the top spot (1:08:07) and Salford Metropolitan runner Chloe Elliot finishing in first place (1:34:15). To end a weekend of sweat, happy tears and a whole load of fun, David Barratt stayed top completing the Hyde 7 (35:30), with female ‘Hell on the Fell’ winner Hayley Simpson finishing first (48:04).

This year, the Tour of Tameside introduced a brand new event to the third stage, Bee in the Park which welcomed runners, friends and family and the general public for an afternoon of learning the ins and outs of living and leading a happier, healthier and more active lifestyle.

Kevin Harmer, Events and Activation Manager commented, ‘’The Tour as always was an incredible success and it was exciting for all of us to finally have in-person events again. Witnessing first-hand the passion and emotion of all our runners is magic and created such a brilliant atmosphere! We had another year of amazing support from our sponsors and partners and I’d like to say a huge thank you to them for helping us make this incredible race a reality. Congratulations to all our runners!’’

All profits from the Tour of Tameside go straight back into Tameside communities helping to enhance and improve health and wellbeing initiatives and fight childhood obesity.